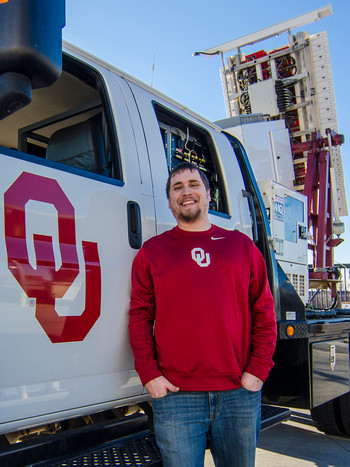 Jim is a Radar Systems Scientist at the Massachusetts Institute of Technology. Jim earned a Ph.D. in Meteorology from the University of Oklahoma in 2015, an M.S. in Electrical and Computer Engineering from the University of Oklahoma in 2013, an M.S. in Meteorology from the University of Oklahoma in 2011, and a B.S. in Meteorology from Millersville University of Pennsylvania in 2009. His research has focused within the realm of atmospheric weather radars, with foci in optimal waveform design, digital signal processing, radar network design and optimization, and high-temporal/spatial resolution phased-array/dual-polarimetric observations of supercell thunderstorms and tornadoes. He has developed new techniques for designing and optimizing pulse compression waveforms for weather radar systems and has been funded under the auspices of the national MPAR/SENSR initiative since 2008. Jim participated in both years of VORTEX2, coordinated the PX-1000 transportable radar during PECAN, and led OU ARRC's Spring convective field program, in which he directed operations of the Atmospheric Imaging Radar. Jim has served as Chair of the American Meteorological Society Local Chapter Affairs Committee in 2013, a member of the AMS Beacon's program, a member of the AMS Subcommittee on Membership, a member of the Institute of Electrical and Electronics Engineers, and a reviewer for various AMS, IEEE, AGU, and IET journals and the National Science Foundation. He has chaired multiple sessions at the Annual AMS Student Conference, has served as a Track Chair and Program Area Lead at multiple IEEE Radar Conferences, and served as President of the Millersville University AMS chapter during back-to-back Student Chapter of the Year Awards in 2008 and 2009.  Jim was awarded the Tommy C. Craighead award for Best Paper in Radar Meteorology at OU in 2015, the OU School of Meteorology Director's Award for Outstanding Service to the Graduate Program in 2012, and won 1st Place for best graduate research in science at the University of Oklahoma, also in 2012.  Jim has won awards for research presentations at the AMS Severe Local Storms, Environmental Information Processing Technologies, and Research to Operations conferences, as well as the International Symposium on Earth-Science Challenges.  Jim enjoys kayaking, biking, flight simulation, and sports.  He is happily married to his wife Emily, a cell biologist, and has one daughter, Audra.  Jim is also an avid photographer.  He specializes in lightning photography and motion timelapse videography, but also takes photos of severe storms, clouds, and other natural phenomena.

The photo and video files contained on this website are provided as-is for general use under Creative Commons Attribution 3.0 (see below for proper usage).  You are free to use these files, as long as proper credit is given at all times, unless otherwise agreed upon with me.  Usage of these files in any way without acknowledgement or pre-existing permission is considered a copyright infringement.  Many of these files have legal copyrights, and if you are using them without proper acknowledgement, I will exercise my legal rights.  In addition, some of these works were created on state/federal field campaigns and tax-funded research projects.  Use of these photos/videos without permission may therefore be in violation of state and/or federal law.  Please contact me if you have any questions.

You are free to share and adapt the works on this page for any purpose, even commercially, if you follow these terms: Attribution — You must give appropriate credit, provide a link to the license (see below), and indicate if changes were made. You may do so in any reasonable manner, but not in any way that suggests the licensor endorses you or your use.  No additional restrictions — You may not apply legal terms or technological measures that legally restrict others from doing anything the license permits.

You must link to the Creative Commons Attribution 3.0 (CC BY 3.0 US) here when using any work on this website.